Isn’t it nice that every year we can look forward to a new Star Wars movie? We’re just a day away from Star Wars: The Last Jedi and we’re adding some extra Star Wars enamel pins around the site to set the mood. Speaking of, we ran across this awesome Han Solo blaster and liked it so much we had to feature it.

The Han Solo Blaster Enamel Pin is 1.75″ x1″ and features “Scoundrel” lettering across the top of Han’s iconic weapon. This is a hard enamel pin and comes in either silver or gold antique metal variants. It’s also double posted so it’s going to stay wherever you pin it. While we all have to wait another year to see a young Han Solo return on the screen it shouldn’t stop you from grabbing this stellar pin for just $10.00.

Be sure to visit MacGuffin Goods Etsy shop for some other amazing pins. We are loving MacGuffin’s Star Wars Mann’s Chinese Theater enamel pin. 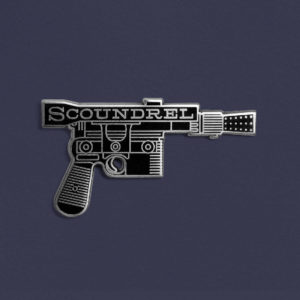